Kickstarter: Joan of Arc (Inglês)
Joan of Arc is a narrative miniatures board game that plunges you into the heart of the Hundred Years? War.
Mythic Games
Product ID: 3283
Product SKU: 3283
New In stock /> 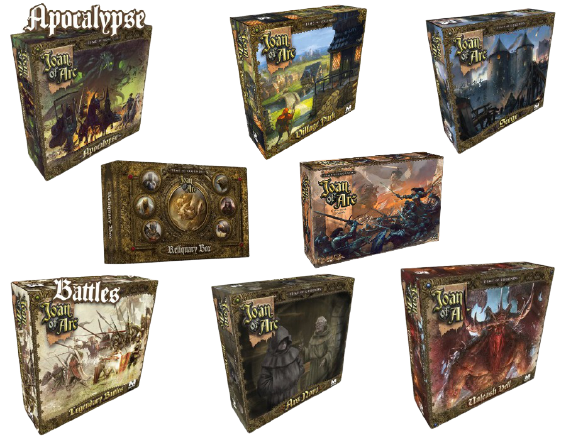 Produto disponível
Joan of Arc is a narrative miniatures board game that plunges you into the heart of the Hundred Years? War.

For more than a century, from 1337 to 1453, the fields of France rang to the sound of constant warfare. The Hundred Years? War is one of the longest wars ever fought and is the source of many of our collective ideas about heroic knights of old. It was also a time of myths and legends, and a fervent faith in the literal truth of the doctrine of Holy Mother Church. It is this world of strife and faith that this game recreates.

In Time of Legends: Joan of Arc, all the creatures that the medieval people thought were real, are real. Whether they are represented on tapestries, in stained glass windows, or in illuminated manuscripts, we take them at their word. It is this dark and epic universe that you will explore in the game?s many scenarios. Some are historical, with no taint of the whispered legends of strange creatures. Others are replete with the supernatural or (saints preserve us) demonic.

You are free to control the army of miniatures that represent your heroes, knights and peasants as you wish in order to achieve your goals. You will decide who moves and where; whether your forces explore, pray, converse with locals, or simply charge into battle. But before we get to the field of glory, you must first choose your side.