Time of Legends: Joan of Arc - Unleash Hell
The Devil is a mixture of awesome and terrifying, with a large helping of run-for-your-lives thrown in for good measure. He is a very large ?miniature?, falling into the rare class of Gigantic Creatures.
Mythic Games
Product ID: 4539
Product SKU: 4539
New In stock /> 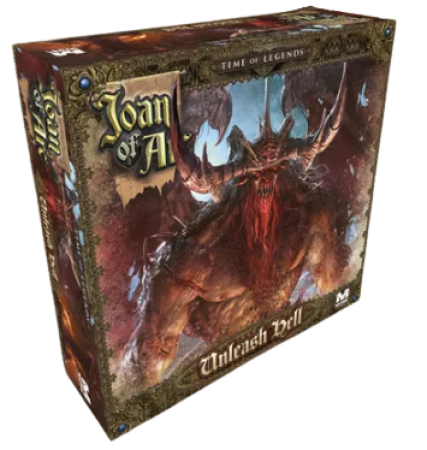 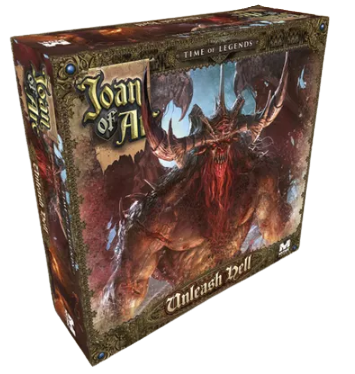 Produto em estoque
The Devil is a mixture of awesome and terrifying, with a large helping of run-for-your-lives thrown in for good measure. He is a very large ?miniature?, falling into the rare class of Gigantic Creatures.

- Calcular frete
Digite o seu CEP, por favor.Selecione uma opção para variação do produto
But you will get not only the Devil, but also 3 bases of demonic Legion, another big farmhouse, ruin miniatures, a selection of tiles for flying and destroyed areas, some special GC dice, stat cards, and a scenario book.
Naturally the Devil fills an entire hex, and as he needs to empty a new one before he can move into it, he’s great at destroying terrain and smashing aside whatever stands in his way. This is done with the special GC dice that have some different results from normal combat dice, including the entertainingly titled STOMP! More importantly, each of these results applies to all units in an area, instead of being allocated to individual units like normal combat. We’ll get to combat in its own update. Suffice to say here that the Devil excels at killing everything.
When it comes to taking hits, all Gigantic Creatures suffer damage like multi-wound heroes. This means that a result that would kill a normal man will only remove 1 wound. And the Devil has 10. And he can only lose a maximum of 3 per turn. And that’s after he ignores the first one because he gets an automatic shield result every time he is attacked.
Número de Jogadores: 2 a 4
Tempo de Jogo: 90 minutos
A partir de: 14 anos
Designer: Pascal Bernard
Artista: Stéphane Gantiez, Bayard Wu
Editora: Mythic Games
Mecânicas: Jogadores com Diferentes Habilidades, Movimento de Área, Rolagem de Dados, Sistema de Pontos de Ação, Tabuleiro Modular
Protetores de Carta (Sleeves) - Não Acompanham o Produto: Não possui